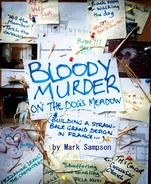 Mark Sampson's the name, straw bales're the game. Well, there's maybe a little more to me than that. This site will tell you about the freelance writer and journalist, instructional designer, trainer and committed amateur DJ.

My book, Bloody Murder On The Dog's Meadow, describes the trials and tribulations of building the straw bale house featured in Channel 4's Grand Designs Abroad. It was a stressful business, overseeing the building of an ecological house in France, knowing almost nothing about house construction - and even less about local building conventions. Larf? I nearly cried. You can look out for a repeat of the programme on More4 or watch it on You Tube. Even better, you could investigate my selection of blogs, La Vie En Straw, to discover how life unfolds without the cameras. 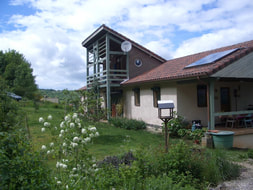 The original programme covered the construction of the house between September 2003 and July 2004. The re-visit came about six years later.  Each time the programme is broadcast, I tend to receive gratifying messages of support from charming people all around the world.

The house is still standing, the landscape's largely unchanged and together they bring dollops of well-being. Straw bales work, even in a fairly wet climate like ours here. I hope that the programme will promote this natural, renewable product as a legitimate building material.

Whereas once Camp Street (as it's now unofficially named) was the only straw bale house for miles around, there are now three or four within hailing distance. Even certain French public buildings are now being made of straw. The word is clearly out!
Powered by